(Thirteenth in a series of topical blogs based on chapter by chapter excerpts from Opiate Nation. Translation into most languages is available to the right.)

We are living in particularly precarious times – for people born since WWII, unprecedented problems the world over – seemingly beyond our ability to control or to deal with effectively. With the Coronavirus pandemic, complex problems have arisen for our global society to attempt to solve, from the manufacturing and transport of medical supplies and personal protective equipment to the best medical treatments and the development of a vaccine – which is viewed by many as the magic potion but only if the majority of people could be convinced to ‘get the jab.’

During this extraordinary year pain has come into most of our lives in ways we have not experienced previously: physical pain from contracting Covid19, emotional pain from being isolated or from watching those we know or care for becoming sick and dying, and mental pain from the anxiety caused by all the unknowns surrounding the pandemic. For people living in poverty, these problems are compounded.

END_OF_DOCUMENT_TOKEN_TO_BE_REPLACED

When life on this earth results in tragedy and loss – personal, communal, international – we are immediately faced with choices we did not anticipate nor plan for. An untimely death, an assault or abuse, financial ruin, a health crisis, relational trauma, anxiety: the list is endless. What do we do? Most of us want to just turn and run while we also know there is no place to run to or to hide from the turmoil within. So how do we take the next step forward when everything in us doesn’t want to and we are facing a challenge we have never faced before?

We remember that we all have choices even when it seems there are none. It is what makes humans unique. Referring back to my blog “Darkness & Light” and the thoughts from Jerry Sittser in his book  A Grace Disguised, when we choose to move towards the darkness knowing we will eventually see the sun rise, we find gifts along the way that we could have never imagined. But we also find more choices. Sittser cites Viktor Frankl’s Man’s Search for Meaning, reflecting on his time in a Nazi death camp and how “the prisoners who exercised the power to choose how they would respond to the terrible loss and darkness of their circumstances displayed dignity, courage and inner vitality. They found a way to transcend their suffering…and so grew spiritually beyond themselves…they learned that tragedy can increase the soul’s capacity for darkness and light, for pleasure as well as for pain.”

END_OF_DOCUMENT_TOKEN_TO_BE_REPLACED 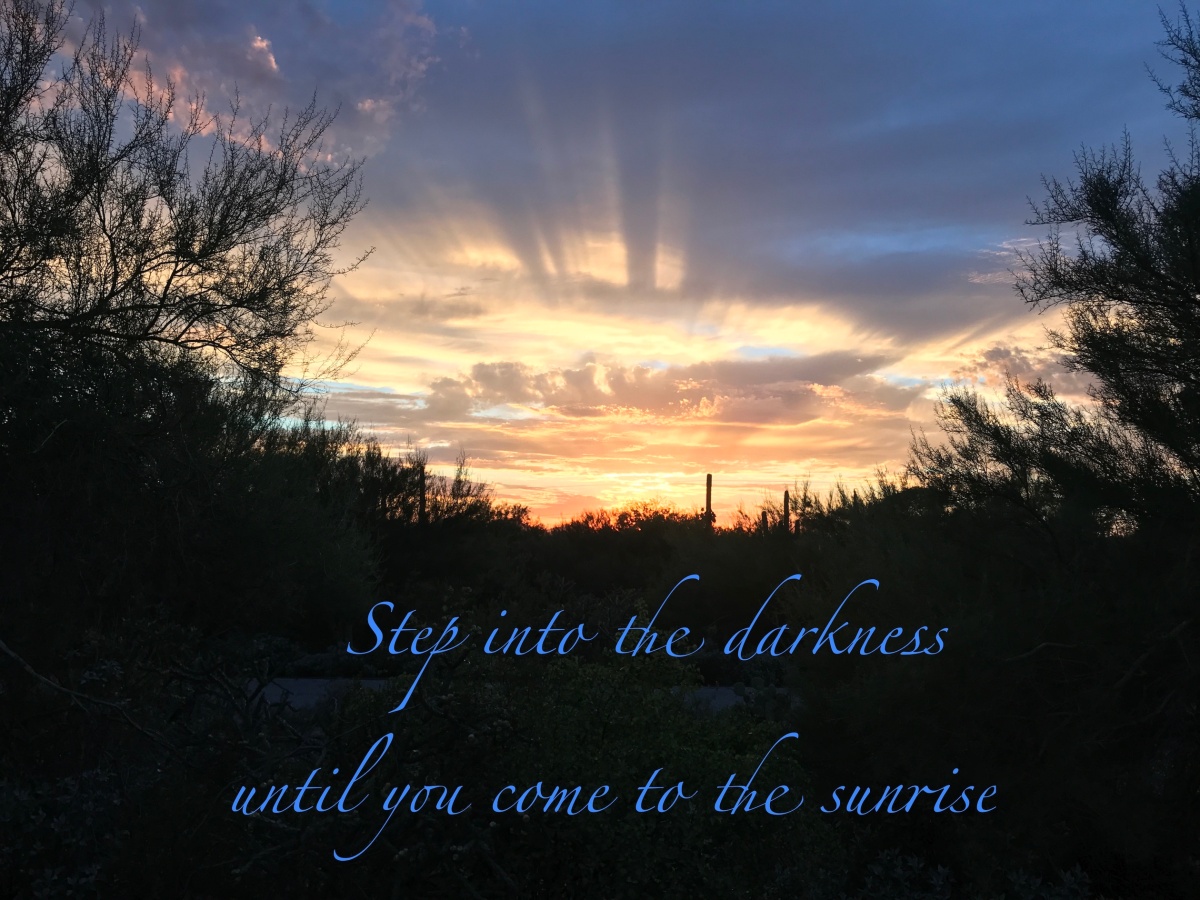 Last week, our son would have turned 31. My husband and I still wonder what that would have been like? Would we have enjoyed celebrating as he got married like most of his friends have? Would he be living nearby or in a distant state for a new job? Would he and his wife be planning to start a family and give us grandchildren? These are questions we can only visit in our imaginations, and yes, they bring pain.

On our son’s FB memorial page and our Instagram this week, I posted a photo of the desert after a storm when a rainbow appeared, with this quote: “As in nature, so in life: it takes both clouds and sunshine to make a rainbow.” I have been pondering these apparent paradoxes in nature and in life, especially the concept of darkness & light. While reading A Grace Disguised by Jerry Sittser, I was reminded again of how we felt from the moment we heard the words from the sheriff’s mouth: “I’m sorry to have to tell you, but your son is dead.” Sittser lost his mother, his wife, and his daughter together in a head-on collision by a drunk driver and says, “Sudden and tragic loss leads to terrible darkness.” Yes. Existential darkness.

He describes a dream of seeing the sun setting and running frantically west toward it in order to remain in some vestige of light – but the sun was outpacing him to sink below the horizon. As he looked back over his shoulder, utter darkness and despair was closing in behind him. He later realized that “the quickest way to reach the light of day is to head east, plunging into the darkness, until one comes to the sunrise.”

END_OF_DOCUMENT_TOKEN_TO_BE_REPLACED

Arizona brought a case to the Supreme Court that sought to stop the Sackler family, who own Purdue Pharma, from transferring billions of dollars from the company in an attempt to avoid paying the claims made against them concerning flooding communities with the prescription opioid painkiller Oxycontin. The Court said they would not hear the case – the justices like to hear rulings from lower courts first.

One of the places the Sackler’s have hidden their money is in an estate in England. A recent article* states: “A complex web of companies and trusts are controlled by the family, and an examination reveals links between far-flung holdings…The estate is proof of the great wealth belonging to the family accused of playing a key role in triggering the US opioid epidemic. But there’s little evidence of that connection. On paper, the land is owned by a handful of companies, most based in Bermuda, all controlled by an offshore trust.” Read the rest of the article which cites the Associated Press’ findings of the deceptive and convoluted practices of a family dynasty that has lived like kings and queens off the misery and deaths of millions of people world-wide. Our son was one of them.

An estimated 10.3 million Americans aged 12 and older misused opioids in 2018. These estimates are likely too low. How many people who are taking opioid Rx’s for pain that could be relieved by physical therapy or a change in lifestyle actually report they are “mis-using” them? My next blog will delve further into this aspect of a country that has become averse to pain…

END_OF_DOCUMENT_TOKEN_TO_BE_REPLACED

Last weekend, my husband and I were part of the 30th annual All Souls Procession here in Tucson. It is part of the Mexican & Latin American celebration of El Diá de los Muertos (The Day of the Dead – see link below for an article about it). November 1st & 2nd are set aside to gather as a community to show our love and respect for our loved ones who have died. I have heard that Tucson’s celebration is one of the largest in America with about 100,000 people.

While John and & were walking, carrying a large photo poster of our son decorated with marigold-colored trim & lights, a woman in the procession came up to us and asked John, “Who is that?” John responded, “This is our son who died of a heroin overdose at 25.” The woman’s face froze for a few moments as we continued walking, then she looked down and turned to walk away as she said in a low voice with a pained look on her face, “My daughter is an addict.”

We don’t know why this woman was drawn to come up to us and ask that question, END_OF_DOCUMENT_TOKEN_TO_BE_REPLACED

Is there a particular reason that opioids have such an appeal to Millennials? In an article in the New Yorker Magazine (http://nymag.com/intelligencer/2018/02/americas-opioid-epidemic.html) entitled “The Poison We Pick,” Andrew Sullivan discusses the modern American life that we pioneered and how “epic numbers of American are killing themselves with opioids to escape it.” Sullivan goes on to say: “It is a story of pain and the search for an end to it. It is a story of how the most ancient painkiller known to humanity has emerged to numb the agonies of the world’s most highly evolved liberal democracy. Just as LSD helps explain the 1960’s, cocaine the 1980’s, and crack the 1990’s, so opium defines this new era. I say era, because this trend will, in all probability, last a very long time. The scale and darkness of this phenomenon is a sign of a civilization in a more acute crisis than we knew, a nation overwhelmed by a warp-speed, postindustrial world, a culture yearning to give up, indifferent to life and death, enraptured by withdrawal and nothingness.” END_OF_DOCUMENT_TOKEN_TO_BE_REPLACED

One time when our son was camping with friends and their families in the wilderness, a friend of ours asked him why he used heroin. JL said: “Because it takes away all the pain.” Our friend shared this with us and several hundred other friends at our son’s memorial – and said he always wondered if JL was referring to physical pain, emotional pain, or both.

From my earliest memories, my knees and legs ached at random times and varying intensity. Sometimes I thought it was from running or playing too hard. At other times, it seemed like it happened when it rained. But, being in a large family growing up in the late 1950’s and 60’s, there were not many options for relieving that pain. My parents would sometimes rub my legs with witch hazel, which made my legs feel good at the time. Sometimes they would wrap my knees in an Ace bandage to help while I was at school. Yet there was one thing that never happened: I was never given any medicine to relieve my pain.

I didn’t realize when I was young that most likely even if my parents had known of a drug that would have relieved my pain, they would not have given it to me because they were not worried about me having to suffer a little pain. They knew that pain was an inevitable and bearable part of life, and an important part of forging resilience. Sadly, John and I — and many of our contemporaries — did everything we could to help our kids avoid pain. Now we are  experiencing the result of those mistaken values. We found the same thoughts expressed by Sam Quinones, as he discusses this at length in Dreamland: The True Tale of America’s Opiate Epidemic. (www.samquinones.com/books/dreamland/) He believes this dynamic is in large part responsible for the opiate epidemic because it is intertwined with our American culture of comfort and prosperity.

Yes, the pharmaceutical companies and their executives who shamelessly promoted drugs that they knew were highly addictive are responsible for much of what we are living with — and dying from — in America today. But we are responsible for facilitating a culture of pursuing a pain-free existence. It can be obtained, but at what price? Is it one more way we humans think we can overcome the perils of nature and living in an imperfect world?

We are not sure when our son first started using opiates, but we think that it started with prescription pills that were not his or ours. And we know that after a serious accident, when the doctor would no longer give him prescriptions, he bought Oxy on the street, then switched to BT Heroin. He just couldn’t deal with the pain and he was not motivated to do physical therapy — it was too much work.

I feel certain that JL was referring to both physical and emotional pain. What may have started as looking for relief from some physical pain when he was a young teenager, turned into a monster that was causing him shame and ruining his life — and that is painful.

In Memory of John Leif Trang

In Memory of John Leif Trang

All about opioid addiction and its treatment with medication

Seeking the truth and bypassing the MSM

The lifestyle of addiction and my journey to and through recovery

The Ohio Society of Addiction Medicine is a chapter of ASAM - A professional society actively seeking to define and expand the field of addiction medicine.

The latest news on WordPress.com and the WordPress community.